Back to all posts

Sixty years later, the goofy "The Mr. Ed Theme," crooned by by a talking horse stabled inside a suburban barn and a song pitcher, remains indelibly etched in the collective unconscious. "A horse is a horse of course of course" indeed!

Anyone surprised I've reviewed the song stylings of a talking horse shouldn't be. I signed up to evaluate anything on YouTube that grabs me—talking and singing quadrupeds always have. A hunky golden palomino raising his voice in song to a melody that may outlast the pyramids is perfect fodder for another installment of Old School Critiques.

You may be wondering why in March of 2021 someone with intellectual leanings has spent countless hours binge watching Mr. Ed—whose four-legged star is regularly derided by certain cast members as a "dumb animal." Well, I've got a beastly side, too, but the main attraction is that there's infinitely more intelligence in that show's scripts than what passes for it in Congress today. After four years of keeping up with the politics of a bitterly divided nation, given a choice between more of that or working my way through two hundred fantasy-world episodes of Mr. Ed, I'll take the sitcom, thanks! 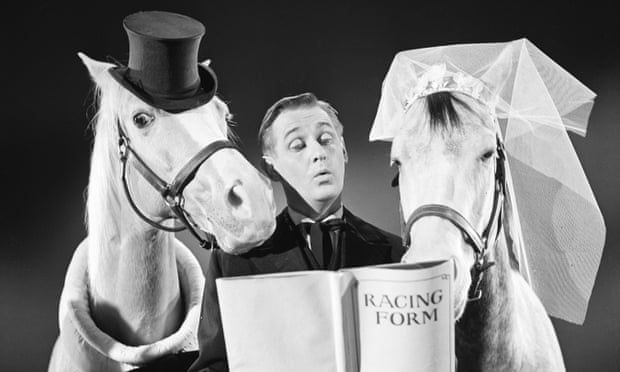 "I now pronounce you Mr. and Mrs. Ed. You may nuzzle the bride."

First Impressions
Ah, black and white = more innocent times. Western motif logo—yessiree! Love the atomic-age titles. Alan Young as Ed's confidante Wilbur Post has the exact sort of face a horse would talk to. Connie Hines, as the wife unit, is a babe-and-a-half who divides her time on the show either stomping off in a huff, jealous of all the attention Wilbur gives Mr. Ed, or arranging herself on Wilbur's lap in the shared comfort of their overstuffed tufted armchair. What's noteworthy about "Produced and Directed by Arthur Lubin" is that same Hollywood visionary also produced and directed the unforgettable Francis The Talking Mule movie series. Any man who made talking quadrupeds his life's work is a man after my own heart.

One initial impression I'm hesitant to disclose, but will anyway cause I can't shake it, is that certain verse forms written in the late fifties and early sixties strike me as having a superhuman quality, as if they couldn't have come into existence without an assist from certain stimulants, most likely Benzedrine. Now Alan Ginsburg would still have been a great poet even if didn't have any chemical help when he wrote Howl, and Bob Dylan still would have been a great songwriter even if he didn't have extra pep in his step as he finessed fifteen-verse epics like "It's All Right Ma" into shape. I'm not insinuating that taking advantage of any brain-enriching substance is cheating; artists use the tools they have at their disposal. Do I know for a fact that "bennies" were involved in the creation of the aforementioned works, or "The Mr. Ed Theme, for that matter?" In a word: no. But it wouldn't surprise me a bit—that stuff seems just too preternaturally good for a primate to concoct without brain boosters.

Take this sample from Ginsburg's Howl (which is like 1% of the poem, by the way) for example: 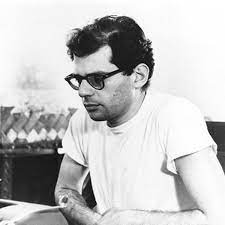 who chained themselves to subways for the endless ride from Battery to holy Bronx on benzedrine until the noise of wheels and children brought them down shuddering mouth-wracked and battered bleak of brain all drained of brilliance in the drear light of Zoo,

Are you catching my drift?

The Dylan stuff is a little more earthbound, but still seems supercharged: 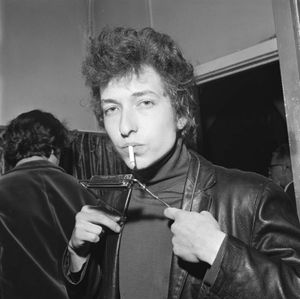 Old lady judges watch people in pairs
Limited in sex, they dare
To push fake morals, insult and stare
While money doesn't talk, it swears
Obscenity, who really cares
Propaganda, all is phony

While them that defend what they cannot see
With a killer's pride, security
It blows the minds most bitterly
For them that think death's honesty
Won't fall upon them naturally
Life sometimes must get lonely

My eyes collide head-on with stuffed graveyards
False gods, I scuff
At pettiness which plays so rough
Walk upside-down inside handcuffs
Kick my legs to crash it off
Say okay, I have had enough
What else can you show me

And if my thought-dreams could be seen
They'd probably put my head in a guillotine
But it's alright, Ma, it's life, and life only 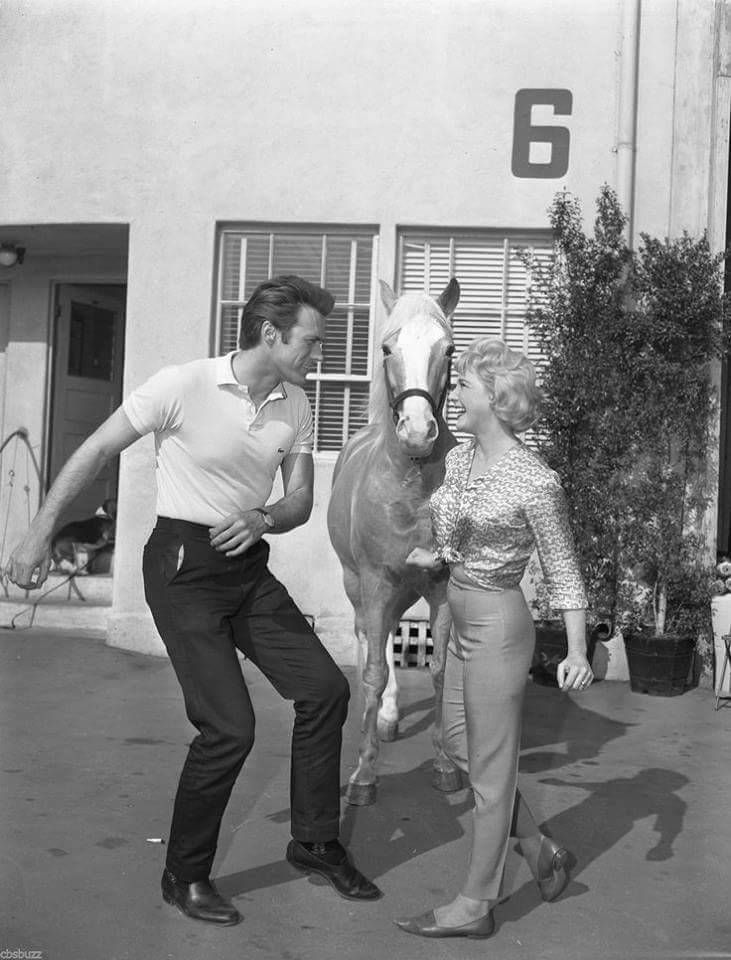 Dirty Harry dances the rumba for Connie Hines while Mr. Ed patiently awaits his next take.

The lyrics
I can rattle off several other TV themes with lyrics that have shown real staying power over the test of time: "Hey Hey We're The Monkees" and "Rawhide" spring to mind.

A fair amount of people still appreciate, "hey hey we're the Monkees, people say we like to monkey around" or "rollin' rollin' rollin', keep them doggies rollin; rawhide." But that number pales with the amount of people who still can't get "The Mr. Ed Theme" that one Jay Livingston cooked up in 1961 out of their heads.

The video starts off with a handsome horsehead peering out from behind his stall's shutters, about to intone in his signature basso profundo:

At which point Livingston takes the reins from the show's namesake and begins incanting:

Right out of the gate, those lyrics are galloping along! There's so much to unpack in three quick lines: 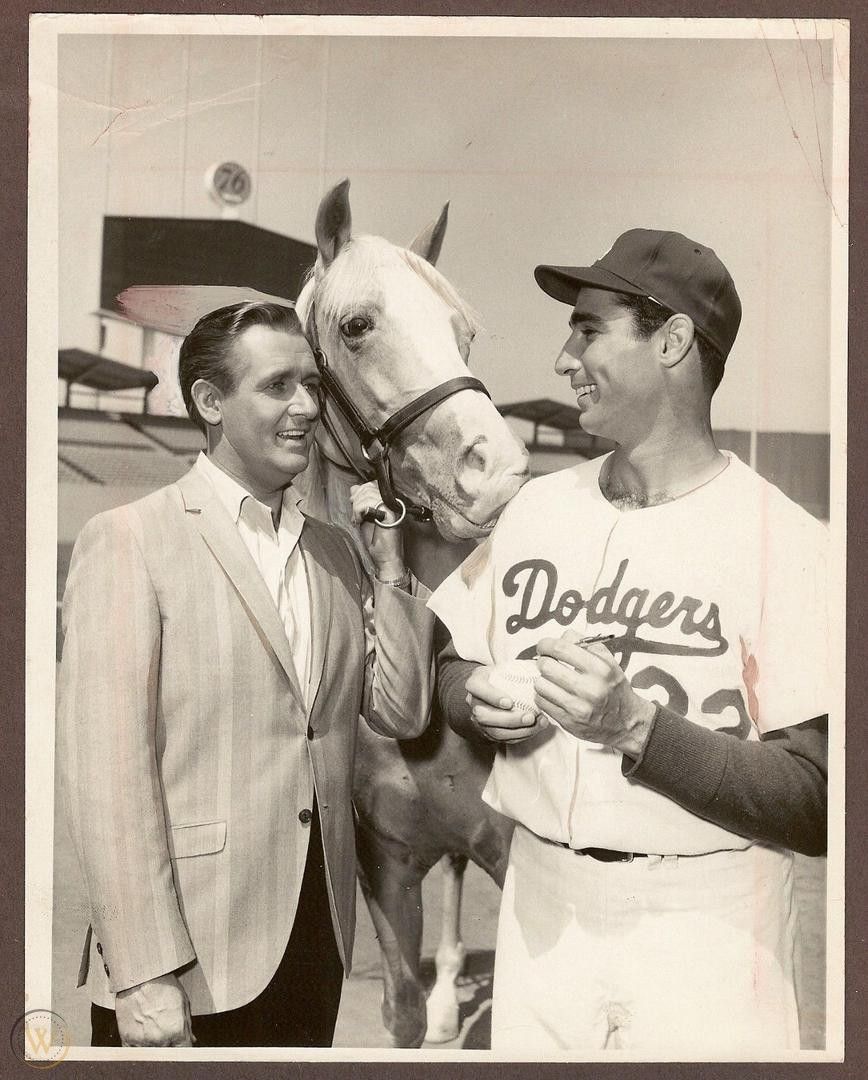 OMG my boyhood idol, Dodgers great Sandy Koufax, schmoozing with one of the beings I most most admire.

Go right to the source and ask the horse
He'll give you the answer that you'll endorse
He's always on a steady course, talk to Mr. Ed 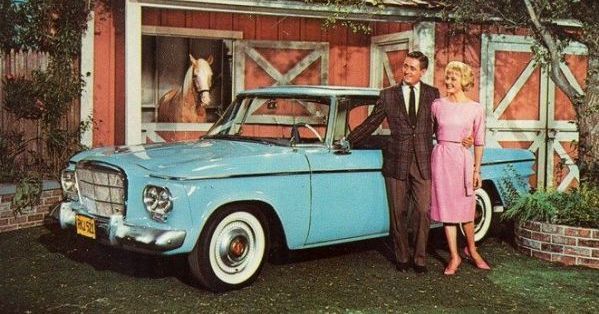 A horse is a horse, of course, of course
And this one'll talk 'til his voice is hoarse
You never heard of a talking horse?

I am Mister Ed

I'm blown away! The only other theme song intoned by an animal character I can think of with lyrics that can remotely hold a candle to this pièce de résistance is "The Wonderful Thing About Tiggers," from children's classic Winnie the Pooh  (speaking of theme songs most likely written under the influence of something-or-other):

Only as great as that one is—and it's not just a little great, it's a lot great—"Tiggers" lacks the universal appeal of an all-time blockbuster like "The Mr. Ed Theme." One reason I snuck in that tidbit of semi-useful information in is that Rolling Stones founder Brian Jones, oft-mentioned in the initial installment of this series, bought Cotsworth Manor and the swimming pool he was found doing the dead man's float in from the estate of Pooh author A..A. Milne!

The music
If the buoyant strains were any less corny or any more hip, Mr. Ed wouldn't have caught fire with the public like it did. Those of you not on Medicare are unlikely to have a plenteous supply of Broadway show tunes, all the rage in the fifties and sixties, stored in your memory banks.  The reason I bring them up here is that the same brass, string sections, and a percussionist or two adept at performing both showstoppers ("Oklahoma") and sillier songs ("I'm Gonna Wash That Man Right Out Of My Hair") in theaters and music halls around the nation often picked up a few extra bucks as session musicians, performing incidental music and the odd theme song for TV shows. That's very likely what we have here, conducted by a musical director practiced at swiftly coming up with bits of sympathetic orchestration—just the thing for classing up low-budget TV dramas and comedies.

My favorite musical bit comes in right at 0:13, leading into verse one: it's the percussive chime of two horseshoes clanging together! Brilliant!

The singing
The Jay Livingston as main vocalist backstory is that the show's producers auditioned any number of accomplished session singers they anticipated would add a pro glow to his immortal verse; only none of them sounded anywhere near wacky enough to match the show's slapstick schtick. So they stuck with Jay's demo version, reluctantly at first, until the tremendously positive response forced them to rethink ever replacing it. That noble effort's been embraced by Mr. Ed's cavalry of fans ever since.

It may have crossed your mind that producer Lubin and the great comic George Burns, the show's main financial backer and also the guy who supervised the show's writers (and the guy who made a fortune from the show's syndication), missed a trick by not assigning Ed a heavier share of the theme song's workload.

Well, it turns out that trick wasn't missed at all, it was just delayed till they sprung Mr. Ed, lead singer, on an unsuspecting public in Ed the Songwriter, Episode 12 of Season 1. The brother of next door neighbor Mrs. Addison, a song publisher, overhears Wilbur humming a ditty that Ed composed in his stall, "Pretty Little Filly" (With the Ponytail). Of course Wilbur has to stand in front of Ed and pretend to sing it, cause of course horses can't speak (unless it's to Wilbur). Space prohibits a detailed probe into Sheldon Allman's inspired mini opus, but let's just say I can't imagine anyone coming up with a better song for the occasion! I've posted the entire episode below (the finished song begins at 21:54):

For all you trivia buffs out there, Mrs. Roger Addison in Mr. Ed was also Mrs. Cosmo Topper in Topper!

{{Note: Bummer, blocked by MGM! I'll try and hunt down another version}}

In Mister Ed's Blues, Episode 8 of Season 2, the show's brain trust once again turned to the Post family's stable of hitmakers (okay, maybe Sheldon Allman had a hoof in it, too). Kay Addison's brother reappears, desperate for another can't miss chart-topper to keep his floundering publishing company above water. Blues is all the rage, so Wilbur (via Ed) is tasked with coming up with with appropriately bluesy words and music. Once again Ed's up to the task, tapping into his natural affinity for roots and grains with "The Empty Feed Bag Blues."

Last Licks
Mr. Ed has been just what the horse doctor ordered for surviving the tail end of a pandemic. I never saw it the first time around, when it originally aired on CBS Sunday nights at 7 PM EST, before Lassie (a sentimental series featuring a heroic Scotch Collie) and The Ed Sullivan Show. That slot was dinner time in the Kohn household, we were still polishing off our rations of instant potatoes with instant gravy and canned vegetables before assuming our TV-watching positions for Lassie, so I never realized what I was missing.

After thrilling to this holy trinity of Mr. Ed hits, I don't envy the next biped writer/performer up for my next foray into Old School Critiques. Talk about a hard act to follow—it's gonna take something really special for any two-legged contender to exceed the lofty standards set by a superstar quadruped, the one and only Mr. Ed.